Thank you for contacting Hyde Fuel. Someone will get back to you soon.
Please correct the following errors:

While you're discovering all our residential and commercial services ... our Oilheat and propane capabilities ... and our heating installation and maintenance, get to know us. On this page, you'll find testimonials from some very satisfied customers, a little bit about our history, and an invitation to join the Hyde Fuel team. If there is any way we can further help you, please don't hesitate to call or contact us.

Hyde Fuel Company was established in 1965 by Phil and Barbara Hyde. When it first began, it was a one truck operation that sold Mobil heating oil and kerosene. The business operated from its office behind Frederick K. Tousley Liquors, located in the Saranac Lake Garage Building on 38 Main Street in Saranac Lake, which Barbara and Phil also ran. The Hyde family’s association with Saranac Lake goes way back; one of Barbara Hyde’s ancestors, Pliny Miller arrived in 1827 and operated a saw mill where the village dam is today.

The business grew steadily through the '60s and '70s. By 1970, it had outgrown its original space, and the office was moved to the Broadway bulk plant, where it’s currently located. In 1972, the business purchased the Mobil gas station on Broadway in Saranac Lake and in 1978, the business further expanded by buying Sturdy Oil Corporation, a Gulf gasoline distributor.

A family owned and run business in the true sense of the word, Hyde Fuel employs multiple generations of Hyde Family members. Tom Hyde, Barbara and Phil’s younger son, who serves as the Company’s current President, joined Hyde Fuel Company in 1978, their youngest daughter Pat worked in the office as Comptroller from May of 1983 until 2004, and Joe, their oldest son has been the Controller since 1990.

The 1980s were a time of further growth and expansion for the company. Hyde Fuel purchased Rae Oil, an Exxon distributorship, and established an office in Tupper Lake. In 1980, the company broadened it reach of business and opened Sturdy Supply, a John Deere dealership on Bloomingdale Avenue in Saranac Lake. Mark Weller, the son/brother-in-law of the Hyde family, was hired in September of 1984 as the Manager of Sturdy Supply.

Through the mid '80s, Hyde Fuel converted several two-bay gas stations in the surrounding area into convenience stores. By the end of the 1980s, both Gulf and Exxon withdrew from the New York market, leaving Hyde Fuel Company with one brand, Mobil.

In 1992, Hyde Fuel Company entered into the propane business. Throughout the 1990s, many changes and developments occurred within the convenience store side of the business, including a new store built on Lake Flower Avenue and the tear down and rebuilding of the Broadway store in Saranac Lake and the Tupper Lake store on Main Street.

With sales of propane increasing, the Company built two propane bulk facilities in 2007 (one in Ray Brook and one in Au Sable Forks). In 2013, the Griffith Oil plant on John Munn Road in Saranac Lake was purchased.

Hyde Fuel Company is one of the largest and longest-operating privately owned businesses in the North Country. The company is very proud to have served the community for 50 years and looks forward to providing the same high level service and community support for many years to come!

We proudly serve the following areas: 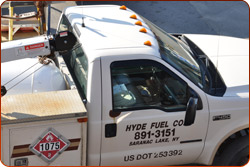 We are proud to be affiliated with the following organizations: